With the oxymoron "Solid Air" in 1973 John Martyn, a visionary Scottish musician, titles one of the most seminal folk albums of modern European music, imbued with blues, jazz and visual lyrics.

Yesterday as today, the evocative squaring of the circle is striking, summarized with the juxtaposition of two opposing concepts: the ethereal and the solid.
A similar amalgam can be found today in the work of the four artists who participate in the exhibition and who, through their works render a dimension of mystery, sacredness, social fragility and sometimes an impending threat.
The short circuit triggered produces palpable tension in the air, restlessness and anticipation of an event.

The artists on show:

Hiva Alizadeh (1989, Kerman. Lives in Tehran) Alizadeh's work traces its origins and skill to the millennial tradition of Kerman Persian carpets in Iran. Nevertheless, Alizadeh applies her technique and knowledge using a different medium (synthetic hair) to achieve a contemporary interpretation of tradition, adding a psychic and cosmopolitan touch to her creations. The East and the West thus meet, generating a complex perceptual interweaving.

Michael Bevilacqua (1966, Carmel. Lives in NY) Known for his eclecticism and perpetual mutation in the search for contemporaneity, Michael Bevilacqua, in his long career, keeps painting by layer as constant, regardless of whether it is digital or analogue paintings. Their stratification creates meaning and restores the complexity in which we are immersed on a daily basis. His works are instinctive reactions to the social and cultural events that inhabit his world.

Mirko Canesi (1981, Milan. Lives between Milan and Brussels) It focuses on the generative power of the surface that the artist reworks through the use of materials and techniques from the world of industry, new technologies and the artisan and decorative tradition, to rework themes such as anthropocentrism, ecology and reality concept. He works with the intention of overcoming what is conventionally defined as "Creativity" by adopting a neutral and non-hierarchical perspective, like a primitive creature drawn from the videogame universe.

Jaime Poblete (Chile 1981) Paints monochrome on canvases that he manipulates, sewing folds on the surface of the canvas to go in the direction of the physicality of the painting. Painting becomes a repetitive and meditative gesture, connected with the knot, the weaving, the Inca quipu, the ritual dress, the pre-Columbian asymmetrical graphics. The research of this artist tends towards a geometrically imperfect structure, symbolically effective like that of the Rehue, the staircase carved into the throne of a tree for which Machi, the Mapuche shaman, ascends to act as a bridge between the forces of heaven and earth. 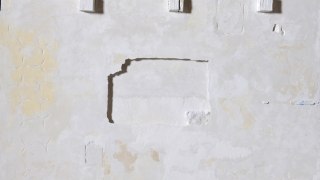 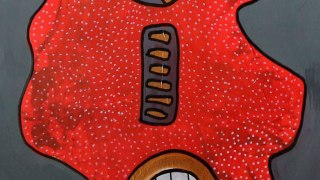