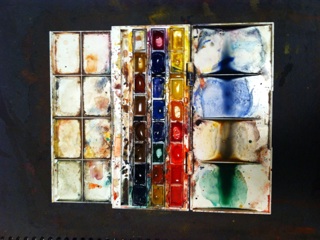 I have a rough idea of what I want to do before starting a panting. I don't follow a precise trace. there is nothing intentional, rather the search of paths hidden in the surface.

I am fascinated by seriality, the repetitiveness and the precious small mistakes that open up to new unexpected prospectives.

my work is informal, non objectual but vital. I like the gesture, and the sign that it leaves behind but at the same time I try to avoid gesture whenever I can.

I keep notes that remain untouched for long periods of time; some take shape and develop, some others remain confined in small notebook waiting for their moment to arrive.

my painting is concrete and concentrates on the relation between color, space and time. watercolor is the media of choice at present: it is fast, transparent and allows multiple chromaticism. it requires concentration and sufficient distance to let happen those incidents, not guided but followed that lead to the finished painting.

paper is the support I prefer, specially when it carries traces of the human work.

illness has certainly played an important role in my work. it forced me to refine my language, leading me to choose a vital and positive approach to contrast the perspective of the absence of future.

future is an idea that I pursue with no rush in the time present, in it's suspended concreteness.